Breast augmentation is regarded as a safe procedure, and silicone implants have been recused of causing havoc since reintroduced on the market in the form of silicone gel in 2006. Silicone gel replaced the silicone oil previously used, and in gel form helped to minimize the spread of silicone in the case of a ruptured implant. Still, some women prefer to go as natural and reject the idea of any type of implants altogether. Where does that leave the woman who desires larger breasts? The answer is fat grafting.

What is Fat Grafting?

As an alternative to breast implants, breast augmentation with fat grafting (natural boob job) uses liposuction to remove fat cells from fat-abundant areas of the patient’s body and then places that fat into the breasts. The thighs, tummy, and flanks typically yield the most (and best) fat and therefore, these areas are targeted for the harvest of fat to be injected back into the breasts for augmentation.

Once the fat is removed via liposuction, it is placed in a centrifuge to separate fat and stem cells from unusable fluids. This good fat is then drawn into syringes for re-injection into the breasts. The amount of augmentation that is achievable is directly related to the amount of viable fat that can be extracted from the patient’s own body. Hence, very thin women may not be candidates for breast augmentation with fat grafting. 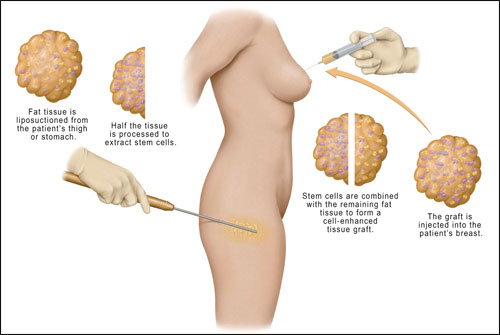 The patient below had a beautiful augmentation with fat grafting. A total of 1400 cc. of fat was removed from her flanks and an additional 400 cc. from her abdomen. After purifying the harvested fat, large 60 cc. capacity syringes were used to inject 570 cc. of fat into the left breast and 510 cc. to the right breast to correct asymmetry in breast size. 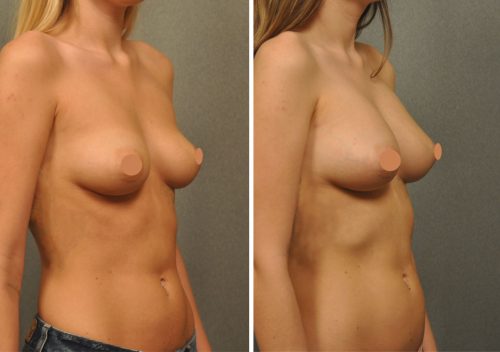 According to RealSelf.com the community driven website dedicated to reviews, patient feedback and cosmetic treatment analyses, 86% of patients who had breast augmentation with fat grafting (also called fat transfer) were pleased with the procedure. Several variables play into the satisfaction level. The skill of the surgeon in providing a smooth and even surface to the liposuctioned areas, the amount of augmentation achieved, and the symmetry of the results all play into overall satisfaction. It is imperative that you select a surgeon that has extensive expertise in not only fat grafting, but liposuction as well.

Going natural might mean going braless, but in 2017, going as natural could be the way you choose your breast augmentation. Triple board-certified plastic surgeon Gilbert Lee, M.D. was an early adopter of fat grafting. He offers fat grafting for facial volume loss, Brazilian Butt Lift and for renewing the appearance of aging hands.

For more information on breast augmentation with fat grafting, please call Changes Plastic Surgery & Spa at 858.720.1440 or fill out the form below.