Botox and Dysport are both injectable proteins that relax the muscles that cause wrinkles through repeated movement.  If you’re a Botox aficionado chances are you’re familiar with the 3 most common injection sites; the forehead to soften horizontal lines, the area between the eyebrows (the glabella) to eliminate the 11’s (vertical frown lines) and the crow’s feet (wrinkles caused by squinting). But these wrinkle relaxing agents have so many more applications.  Here are just 5 offbeat applications for Botox or Dysport.

1. Bunny Lines appear on some people when they wrinkle their nose or squint their eyes. Botox can be injected into the sides of the nose to help prevent them from appearing.

2. Neckbands are caused by laxity of the platysma muscle at the angle of the neck and laxity of skin. As aging occurs and the thickness of skin decreases and the edge of the platysmal muscles appear as protruding cords. Botox can improve the appearance of these cords by relaxing the muscles bands.

3. Orange peel skin, sometimes called peau d’orange, appears as dimpling on the chin when making certain expressions. A small dose of Botox or Dysport into the muscle just under the skin does a great job of smoothing the texture.

4. Hyperhidrosis is the term used for excessive sweating. This can occur anywhere where there are excessive sweat glands but most frequently involves the palms, soles of the feet or underarms. Multiple injections are required to arrest excessive sweating, typically 50 cc. of Botox per side or 150 units of Dysport. The effects can last 4 months and up to a year in some patients.

5.  When too much of the upper gums show it’s referred to as a gummy smile. Injecting either Dysport or Botox into the upper lip muscles can minimize the amount of exposed gum. 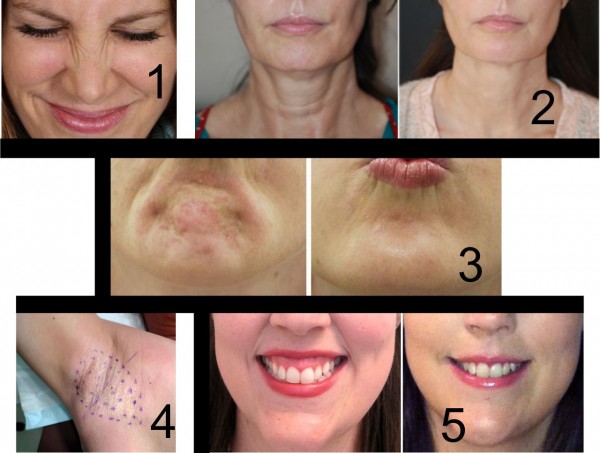 New uses are being discovered every day for these workhorse wrinkle relaxers. If you experience any of the above or have a condition you’re curious how to treat, contact Changes Plastic Surgery & Spa in San Diego.